The first race in history to last 24 hours, created in 1923, Le Mans is legendary. Known the world over for its famous endurance race, which annually welcomes the best pilots as well as gentlemen drivers, and 250,000 spectators.

The cinema has moreover been inspired on several occasions by the race of Le Mans.Of course, the famous film with Steve McQueen, called Le Mans, and released in 1971, from which our pair of gloves is fully inspired in particular on these colors white and blue and red stripes.
Steeve Mc Queen, himself a great pilot and biker, wanted to express in a film the quintessence of this race.
Luc Besson, also shot several scenes during the 24 Hours in 2002 for the film Michel Vaillant, adapted from the famous comic strip.

Developed around the Bugatti circuit, the 24 Hours of Le Mans route has large sections of road sections, the best known of which is the famous straight line of the Hunaudières, which is over 6 km long. There are also other famous ones like Tertre Rouge, Arnage, Mulsanne … portions that remain unique in the memory of endurance racing fans. Its first edition took place in 1923, with a circuit measuring 17 km.

Its fame unfortunately also comes from the dangerousness of this race and its tragedies: Many pilots lost their lives during this race (22 deceased pilots) but also among the spectators. The most striking being the accident of June 11, 1955, when Pierre Levegh’s Mercedes 300 SLR flew and crashed into the stands: The French driver was killed by taking the lives of 82 spectators!

Hold Fast wished through this pair of leather gloves to pay tribute to this legendary race but also to all those who left their lives there, out of passion. 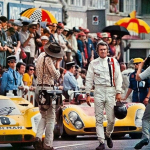 There are no reviews yet.

Only logged in customers who have purchased this product may write a review.

There are no questions yet

Your question will be answered by a store representative or other customers.

Thank you for the question!

Your question has been received and will be answered soon. Please do not submit the same question again.

An error occurred when saving your question. Please report it to the website administrator. Additional information:

Thank you for the answer!

Your answer has been received and will be published soon. Please do not submit the same answer again.

An error occurred when saving your question. Please report it to the website administrator. Additional information:

Finitions : Bright varnish, resistant to water and sun. Pelliculate treatment for outside conditions.

Finitions : Bright varnish, resistant to water and sun. Pelliculate treatment for outside conditions.

Ideal for hanging on the D ring or passing your pants to keep your keys or your wallet chain.

Sticks to all supports

A video review from : Guido Bösherz Barbier from Germany

Guido All the team want to say Tanks you !

– Gloves are warmer and of excellent workmanship.

– Elastic band on the wrist allows a good fit without over tightening.

– Waxed by hands to give rustic look .

If not in stock, orders are accepted but dispatch within 4 weeks after order.

You’ve asked us for it many times, it’s now available!

To embellish and patinate your leathers and above all to keep this inimitable original flagrance.

An essential product that will allow you to preserve this bewitching scent appreciated by lovers of beautiful skin.

This natural beeswax product is secreted by bees who use it daily to build the combs of the hive to deposit their honey, pollen and brood.